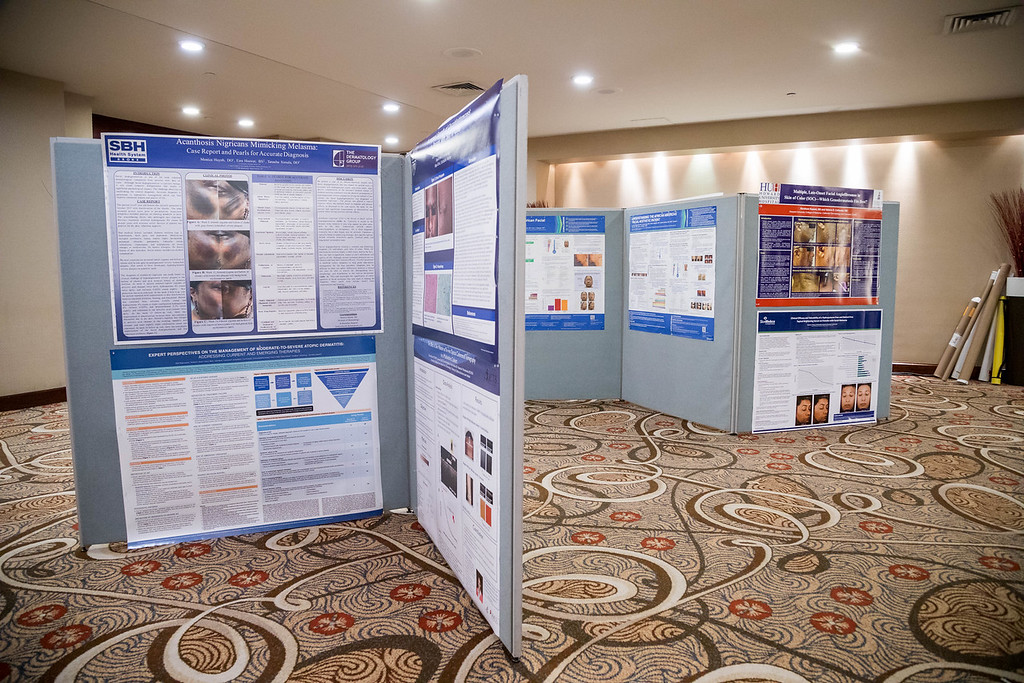 A selection of scientific poster abstracts from Skin of Color Seminar Series 2018 (now known as Skin of Color Update.) Thank you to our poster presentations and faculty.

We present a case of a 79-year-old African American female with painful vulvar ulcers of several years duration. She presented to an OB-GYN and was tested for syphilis, lymphoproliferative granulomatosis, herpes, TB, and fungal infection. Once these etiologies were ruled out, she was referred to dermatology where the knife-like lesions prompted suspicion for cutaneous Crohn’s disease. However, the patient had not been previously diagnosed with Crohn’s and had no gastrointestinal symptoms of the disease. Biopsy revealed non-caseating granulomas, confirming a probable diagnosis of vulvar Crohn’s. The patient was initially treated with oral steroids, and her lesions showed improvement after one month of therapy. Due to the severity of her case, infliximab was recently added to her regimen to further promote healing.
Less than 200 cases of vulvar Crohn’s disease have been reported in the literature. The mean age of onset is 35, making our patient’s advanced age uncommon. Vulvar Crohn’s is often difficult to diagnose, due to the multitude of differential diagnoses for genital ulcers. Further, a significant amount of patients with vulvar Crohn’s disease will not exhibit any gastrointestinal symptoms and vulvar Crohn’s will be the initial manifestation of underlying disease. As a result, many patients suffer from the disease for many years before it is recognized as cutaneous Crohn’s. A biopsy is necessary to achieve definite diagnosis.
Treatment recommendations for vulvar Crohn’s have not been well-established. However, initial treatment often includes metronidazole, steroids, and/or immunosuppressants. Recent case-reports have shown success in treating severe, or refractory, vulvar Crohn’s with infliximab.  END_OF_DOCUMENT_TOKEN_TO_BE_REPLACED