Intralesional Triamcinolone Acetonide in the Treatment of Traction Alopecia 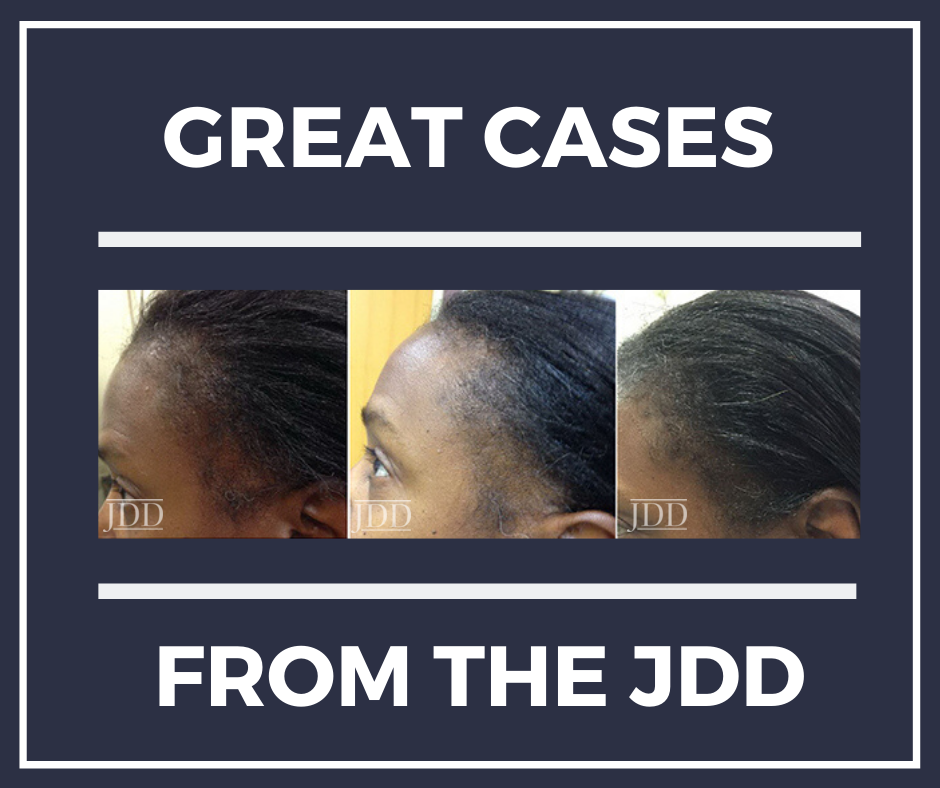 Source: Next Steps in Derm

In this case series, JDD authors evaluate the efficacy and safety of intralesional triamcinolone acetonide injections (ILK) when used with topical minoxidil in the management of traction alopecia in 6 African American women.

Traction alopecia (TA) is a form of hair loss secondary to repetitive and/or prolonged tension to a hair follicle over an extended period of time. This typically results from wearing tight hairstyles, or an acute traumatic event.1,2 As the etiology is mechanical trauma of the hair follicle, it can occur in any ethnic/racial demographic or gender. It has been observed in ballerinas, as well as Sikh Indian males, all of whom wear hairstyles that exert tension on the frontotemporal hairline. However, most cases of TA occur in women of African descent.1,3

The diagnosis of TA can be made clinically, as well as through the histological examination of a scalp biopsy. The earliest signs of TA are perifollicular erythema and pruritus with or without surrounding papules and pustules.4 The fringe sign of TA is a clinical finding characterized by the presence of retained hair along the frontal and/or temporal hairline, and it has been shown to have high sensitivity for detecting early and late disease of TA.5 On dermoscopy, one may observe reduced hair density with an absence of follicular openings in late stages, and in earlier stages an absence of hairs with preserved follicular openings outlined in brown, particularly at the periphery of the patch of affected scalp, corresponding to the pigmented basal cell layer of the follicular infundibulum that can be seen on histology.6,7 The histological findings can also vary depending on the stage of the disease. Early findings on histology include trichomalacia, normal number of terminal hairs, preserved sebaceous glands, and increased number of telogen and catagen hairs.8 Late disease findings include a decreased number of terminal hair follicles which have been replaced by fibrous tracts, vellus hairs, and retained sebaceous glands.8

Recommended treatment for traction alopecia includes the use of minoxidil and intralesional steroid injections. However, evidence-based proof of the efficacy of ILK in the improvement of TA has not been reported in the literature. In this case series, we evaluate the efficacy and safety of intralesional triamcinolone acetonide injections (ILK) when used with topical minoxidil in the management of TA in 6 African American women.

A retrospective chart review was performed in patients carrying a diagnosis of TA, who were seen at an active hair disorder clinic between January 2016 and December 2017. All patients who were treated with ILK, and whose treatment progress were recorded with photographs were included. Those who used minoxidil as an adjunct treatment were also noted. The management of TA was assessed by comparing the changes in hair density along the frontotemporal hairline. All patients had been instructed to avoid tension-related hair care practices.

This study shows that ILK, when used in conjunction with topical minoxidil, is effective in halting TA progression, and in improving frontotemporal hair density in patients with TA. Our patients reported no adverse systemic effects from the injections that are commonly associated with corticosteroids, and only one patient reported itch in the frontotemporal hairline, a symptom which is more likely a side effect of the topical minoxidil or a manifestation of the TA pathology itself.